The weather was cool but made colder by the brisk wind most of the event so there was no one who was able to get down to the lap record of a 1:29.4 but several did get close.  Before we start, a little introduction – This season brings a new variation called “musical cars” . . . . so here we go.  First, the black Scorpion (used to be pink) that Clint McMahan has been driving has been leased by Ryan Mayfield for this season thru the Indy Runoffs.  Second, Clint McMahan has stepped back due to his crowded business schedule and moving to a new house (more room for cars, of course) and will be concentrating on working with his father, Dan (the mechanical wizard), in servicing/tuning F600’s along with coaching/mentoring F600 drivers in order to help the class.  So, for this event, Clint has been working on Craig Laprade’s car (formerly owned by Eric McRee) getting a new motor in it along with fixing any other issues he finds as he drives it to make it as fast as possible, a process called “Clint Certification”, you could say.   And, yes, you can get your F600 “Clint Certified”.  Third, for this event, Mo Makki’s car was being driven and developed by Carl Maier as Carl was without a car (sold his) and Dan had just completed major modifications to its cockpit so it needed dialing in.

Back to racing – In early qualifying, three drivers got close to the above lap record of a 1:29.4 – first was Ryan in the black Scorpion at a 1:30.019, next was Calvin Stewart at a 1:30.245 with Clint in Craig’s car at a 1:30.867.  Further back was the rest of the pack – 4th Cory McLeod, 5th George Bugg, 6th Austin Morvik, 7th Jack Walbran, 8th Jeff DeLong, 9th Russell Strate, 10th Carl Maier, 11th George Fox and last, newcomer Robert Gray whose car caught fire and he had to retire from the event.  Qualifying started right off with a heart stopping, tire smoking spin (actually twice around) by Ryan on the first lap at the start/finish line with Clint right on his tail.  Ryan kept the car in the middle of the track and then proceeded on to win the pole.  This is why Clint trusts Ryan in the black Scorpion but it took a little while for everyone to catch their breath . . . .  whew!  Up until this point, Clint & Dan had installed a larger oil cooler and fixed some water cooling issues to help Craig’s car along with dialing it in and it showed.  Jeff, George Fox and Carl were having troubles with their cars, slowing them down for the moment.

The new grid for the Sunday race was as follows:

Sunday’s race saw two packs running slightly apart with Ryan, Calvin and Clint in the front pack and the rest of the drivers in the second pack not far behind.  For seven laps, the front pack of Ryan, Calvin & Clint swapped positions nearly every lap until . . . . . . Ryan cut a tire at Turn #1 ending his race.  Then shortly after that, Calvin added to the drama by spinning, giving the lead to Clint but . . . . slowly, lap by lap, Calvin’s straight-line speed reeled Clint back in and he finally passed Clint with two laps left relegating Clint to 2nd with Clint coasting to a stop after the finish line, out of gas.  In the second pack, Jeff, Jack, George Bugg, Austin and Cory swapped positions all race with Cory (lost brakes and later found a broken right spindle) and Austin (water leak) dropping out.  There was a little drama at the back as well.  Both George Fox and Carl Maier got black-flagged – no one could tell George why he was black flagged so he went back out, but Carl was erroneously black flagged for a non-working transponder ruining his charge up thru the field and he protested this to the stewards who moved him to the 9th finish position in front of Russell Strate who had retired after going off track coming down the hill from Turn #11; Carl was ahead of Russell when he was erroneously black flagged.  Thus, Sunday’s race results were as follows:

The Hyper Racing Hard Charger Award winner is Jeff DeLong who started 8th and finished 3rd along with working hard all weekend on his car troubles with his mother and crew chief, Marilyn.

Here are the series points standings after the first round:

We are very thankful for our valued sponsors who have made this series possible:

The Formula 600 Challenge Series was developed to help promote an affordable open wheel formula car class to showcase talent without large financial race budgets.  There are no paid staffers and one hundred percent of all sponsorship monies and product goes directly to the drivers in our series mostly as a tow fund payment for each race.   The Formula 600 open wheel cars use a 600cc motorcycle engine and a six-speed sequential transmission revving up to 15,000 rpm with speeds in excess of 140 mph. The sound of these cars is likened to F1 cars.

The group photo is left to right: 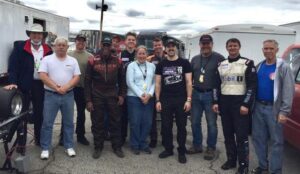