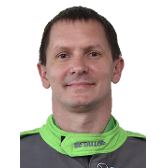 Per Clint's request he has asked me to write about what he has been doing in the SCCA arena.

I have known Clint since before he could drive (he is now 40) and he has that rare God-given talent to be what many in SCCA call an "alien" driver, that he can drive anything, very fast, right off the bat. And yet when you ask Clint about his many Solo and Road Racing accomplishments over these years, it is like trying to pull teeth - he just does not dwell on the past but is focused, like a laser, on his current project.

When Clint was 15 (1995), he started driving an old, worn out Datsun Z car in Solo events with his father, Dan (the mechanical wizard in the family).  They immediately started winning just about everywhere they ran locally and Clint received rookie of the year. In 1996, Clint went on to win the divisional championship and points championship for his class. In 1997, Clint was protested for having too small of a motor and disqualified by a driver that Duane Dunham of D.A.R.E. Racing had built a car for. Duane then invited

Clint to co-drive his Spitfire in D Prepared for the remainder of the season as an act of kindness. Clint quickly got my attention after winning the divisional championship in Duane’s car and then went to the solo nationals where Clint almost trophied his first time competing there. After this endeavor, Clint co-drove with me in my F500 in F Mod (DM then CM and finally FM) and he trophied several times in my car and his own through 2001. In 2002, Clint teamed up with Jay Stroud  to go road racing in F500 where he, again quickly, started winning pretty much every road race that he ran over several years with several podiums at the Runoffs. After a very frustrating race in 2008 at the Double National at VIR Clint blew a motor almost every track session while also winning the pole for both races, we (Clint, Dan and myself) talked about a better, more reliable drive train for F500.  We decided on the 600cc motorcycle drive train and converted a KBS Mk.5 chassis into the very first F600 in 2009. So Clint "disappeared" from the National road racing season while we developed, converted and campaigned F600's on the regional level for four years. We also formed a partnership for this endeavor to service, support, repair, build and rent F600's with our goal of attracting drivers to this car. The result has been that there are now over 45 F600's around the country.  Since October, 2013, F600's have been part of F500 in SCCA road racing.  On top of this, a pro series was started back in 2013 called The Formula 600 Challenge Series (www.theformula600challenge.com) and FB page - https://www.facebook.com/Formula600Challenge/

In the last several years, Clint learned about being "inch perfect" in the F2000 step of the Mazda Ladder to Indy, he won the pole for the Daytona Runoffs but broke on the first lap; won the pole at the Indy Runoffs where he "spun and won" the race and last year, he won the pole at the VIR Runoffs and during the race while "searching for the perfect lap" he set a new track record four laps in a row, that is - each lap was faster than the one before.  Truly an alien driver.