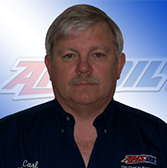 Started to race at age 17 in a B-Gas dragster, yes, the old front engine cars but that didn’t last long because Uncle Sam said he want to see me.  And this lasted 22 years by the way.  While in service I was able to race a variety of cars, go karts and even bicycles at times.   Being from Indianapolis originally, racing was  always on my mind.  Had some success with a '69 Dodge Dart Swinger 340.  After that phase wore off I went to the karts - both sprint and enduro.  In the late 70’s I ran at kart week in Daytona with a 250 Zip kart.  Left racing about that time until I got stationed in Texas.  Ran into these little cars called F440 at the time.  Bought a Zink Z-19 and ran it for a couple years until I was forced to sell it and stop racing again.   Then in the early 90’s I bought a KBS MK5 and ran it until the urge to move up to something different, a D Sport Racer.  Ran that for 3 years until the urge to get back into open wheels, yep, a Formula Continental.  Had that for about 2 + years, then I went back to the D Sport.   Then along came the F600 which I thought would be a blast, and it has been.  That brings us to where I’m at today.   I have had past championships, divisional (3 time F5 SWDiv Champion) and regional, even a F600 Challenge Series championship but heck that’s the past, so I continue to look forward to the next adventure.

Since then Carl has been a regular in the Formula 600 Challenge Series and helps out on the administrative side as well.